“We want to inspire children and their parents to ride bicycles as a fun way to get around and become familiar with the benefits of the natural environment where they live. Early learning and adoption of cycling skills could help to set the basis for a major behavioural change within our community”.

There has been a high level of interest in having a Blue Trail for some time now. LFT recognises that the lack of this particular trail presents a barrier for many cyclists and we are working with Forestry and Land Scotland, Cairngorms National Park Authority, Highlands & Islands Enterprise and Developing Mountain Biking in Scotland to make it happen.

The main attraction to the area has been the mountain biking trails, which are focused on the higher-level capability of these sports enthusiasts. This was how they were originally designed and they represent one of the main strengths of the facility with a strong customer base.

Regular feedback has indicated that the Laggan Wolftrax trails are in need of further development. Critical to the success of the trail centre is the construction of a BLUE trail that would enable the venue to provide facilities for all and it would enhance the trail centre for all capabilities and have a positive impact on the local community both for less experienced cyclists and those of all abilities.

The Laggan Forest Trust has been awarded funding from the sportscotland (Cycling Facilities Fund), Cairngorms National Park Authority, Highlands and Island Enterprise among other organisations to build a blue grade trail at the Laggan Wolftrax Trail Centre. The trail centre is on land owned by Forestry and Land Scotland (FLS) and LFT is working in close partnership with FLS to deliver the project.

The focus of this project is on redeveloping the Laggan Wolftrax trail network to modernise and broaden its appeal to a wider market of riders by building a blue grade trail and adding the relevant connections to the trail network, modifying sections of the Lower Red and Orange (recently regraded to Red) trails to provide a refreshed and modernised trail centre.

A Pump Track for Laggan

The Laggan Forest Trust (LFT) submitted a funding application to SSE’s Stronelairg Community Benefit Fund for partial funding for a project to build a small bike park for young people, also known as a “pump track”. The fund contributed £3k to carry out a feasibility study.

This project intended to deliver a pump track or small bike park that will encourage young people to cycle for fun and develop their skills to become competent cyclists, either as a regular activity or taking it into higher-specific disciplines like road or mountain biking.

The project’s main objectives were:

Not the right terrain

A feasibility study that was carried out suggested that building a pump track in the desired location would prove to be economically unwise. The terrain was very soft and it would require large amounts of imported material that would make the project too expensive.

With the consultant CRC Construction, we looked at other options for building something similar with the land we had available. The outcome was that upgrading the existing Skills Area was the most efficient way to spend the funds available.

The former Skills Area and old timber structure succumbed to Storm Arwen in December 2021, which saw the structure damaged beyond repair. The proposed new skills area was taken on by Forestry and Land Scotland who financed the upgrade. The new facility was open to the public in March 2022. 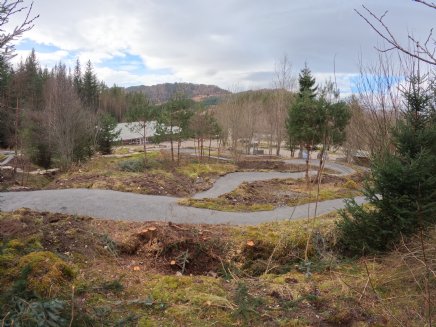 The Multi-use trail project was a transnational LEADER co-operation project between the Community Woodlands Association in Scotland and the Sjö, Skog & Fjäll Local Action Group in Sweden. The objective of the project was to share innovative techniques and best practice for the construction, promotion and management of mixed-use trails (i.e. where it is likely that multiple user groups: pedestrians, cyclists, riders might interact). LFT was a partner in the project and sought to improve a potential Heritage Trail in a specific section that needed a reduction in gradient to make it available to a wider audience.

The “participating community woodland groups” were:

The project was finished in January 2021. 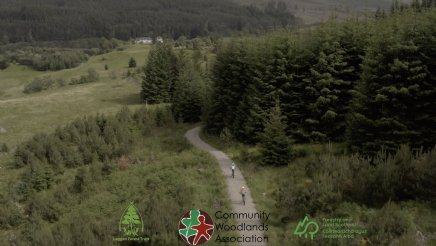 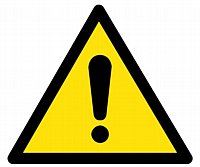